Telford in Birmingham was the venue for the UKCS and Pelvic Floor Society first Pelvic Floor Summit. Presentations included sexual function, urogynae, urology and colorectal they were varied and most informative. We headed over for the conference as the African heatwave hit Birmingham. 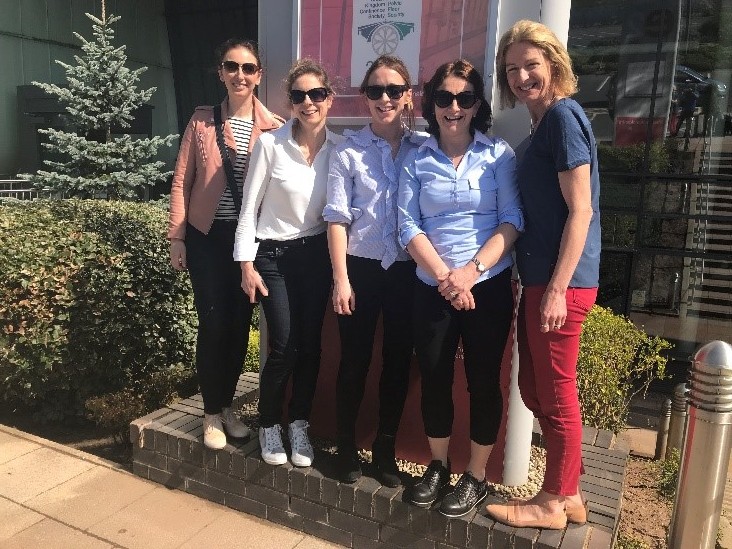 In the photo from left to right Sarah Mullins, Helen MacDevitt, Grainne Wall, Sharon McNally and Maeve Whelan. Eimear Murphy not in the photo was also at the conference.

Probably the most topical and frequently appearing at the conference was the question of mesh which appears in the media so often at the moment. There was reassuring information on the safety through the data on mid-urethral sling (MUS) procedures for stress incontinence where other mesh procedures for pelvic organ prolapse are falling in number. It varies from country to country whether mesh for prolapse is allowed and it is still allowed in England and Ireland but not in Scotland. Gynaecologist and Urologists now fear that a surgery for stress incontinence which should be beneficial where conservative treatment has failed will be banned because of lack of knowledge and fear rather than on data that is collected by the profession and on the recommended guidance. The profession is now watching what happens at a political level to see what is going to happen going forward.
In the meantime, physiotherapy gains more recognition for its role in chronic pelvic pain and theories for chronic pain continue to be researched.
Sexual health is promoted and never better than by physiotherapist and comedienne Elaine Miller who through Twitter has get up #pelvicroar to promote better awareness of pelvic floor problems as a barrier to optimal sexual health.
For more information on mesh see https://www.rcog.org.uk/en/news/rcog-response-to-nice-guidance-on-transvaginal-mesh-repair-for-prolapse/

MENU
We use cookies to ensure that we give you the best experience on our website. If you continue to use this site we will assume that you are happy with it.OKPrivacy policy